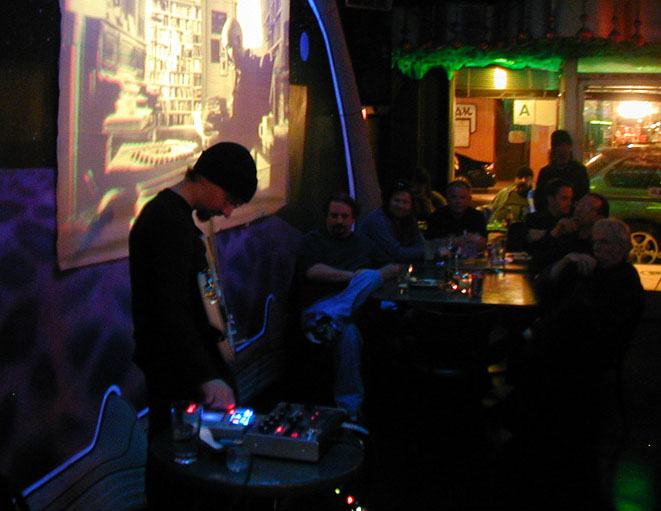 As recently as half a year ago, if you had told me that I’d be able to play a solo gig in Los Angeles with 20 or more people showing up, on a weeknight, with a starting time of 10:00 PM, I’d never have believed it. I’d long ago resigned myself to thinking of live gigs in LA as “research and development” for “real” gigs, rather than as anything that would be able to generate some sort of tangible following for myself here in the city. But that was just the situation I found myself blessed with for the January 4th gig I did at Nova Express in Los Angeles.

All credit for this has to go to Lisette Sutherland of Lighthouse Promotions (aka lightling), who has given me a consistent spot to play, regardless of how many people I might bring in, since the middle of last year. This is completely unheard of amongst booking persons in Los Angeles, but Lisette’s managed to pull off a regular Wednesday night series of eclectic music at the fantastic Nova Express Cafe, and I’m deeply grateful to have a chance to be part of what she’s doing.

I had a fine time at the show; I knew this would be my last gig before the New York Guitar Festival, so I treated it as a sort of “beta test” for some new songs and approaches. Probably the biggest random element of the night was that I used a Korg KAOSS pad to post-process the Echoplex loops. The KAOSS pad is a very cool slant on effects: a player creates sounds and warps incoming audio by running their fingers along a touch-sensitive screen, and changing the placement of the fingers along the x-y axis of the screen creates all sorts of different sounds.

This was the first time I’d use post-processing on an Echoplex gig since, oh, at least 1997, and as a guy who’s built part of his reputation on not using any effects, a pretty big change. Overall it was a cool addition to the sound, although it confirmed the fact that I need to do a lot more homework before I’ll be able to confidently use it as a natural extension of my thing.

Overall the gig was a strange but very cool mixture of well-rehearsed focus and barely-controlled experimentation. Some new covers (including “Sign ‘O The Times” and a sort of John Fahey-meets-Charlie Hunter version of “Talk,” the Kraftwerk tune popularized by Coldplay) came off well, while some older covers were a mixed bag (“Fool’s Gold” really needs to be nailed down in the practice room, “Fascination Street” was a cool house-y thing, and “Interstellar Overdrive” sounded like something from Miles Davis’ Dark Magus era). A number of friends who I hadn’t seen in ages were kind enough to show up, including Thomas Nordegg, Bob Rice, Ronan Chris Murphy, Bill Forth, and others. And the crowd was sufficiently into it to demand a second set when I wrapped my first one up after a mere 90 minutes. Who am I to argue?

The following gig, two weeks and 3000 miles later, was at the 2006 New York Guitar Festival. This was a very important gig for me: I played at the 2004 New York Guitar Festival as the opening act for David Torn, but this time I was coming back not as an opener, but as a full-on show in my own right. A very flattering thing, to be sure – serious thanks to festival organizer David Spelman for having me back on my own steam – but also, for me, fairly nerve-wracking.

Getting to The Monkey on the afternoon of the 19th was a very strange experience. When I was there last year, for the five-Echoplex 5.1 series of gigs, it was somewhat akin to staging a small-scale military commando mission: a whole day of loading in gear and checking audio levels, days of pre-gig rehearsal and adjustment, and a series of concerts where I tried to come to terms with a whole new layer of technical and sonic complexity in front of live audiences. But this time, I showed up, set up my usual rig, ran one mono quarter-inch cable from my Echoplex into the Monkey PA, and was basically ready to go.

Why no five-Echoplex orgy this time around? A few different reasons. For one thing, The Monkey was one of the principal venues for the New York Guitar Festival this year, with a number of different gigs happening there over the course of several weeks – Dominic himself had two sold-out solo shows there the night after my own gig – and the extensive amount of time we used to load in and soundcheck gear at last year’s run simply wasn’t available to us. Just getting our hands on five different Echoplexes is also a challenge; I own two, both of which I bring to my gigs regularly, but getting three additional ones proved to be trickier than we might have imagined last year, and I wasn’t crazy about trying to track down additional units this time out, especially since some of our sources from my previous run were unavailable this time out. Beyond that, there’s the simple fact that a one-Echoplex gig is my native habitat, and I can go into that kind of show with a level of confidence and togetherness that’s unfathomable for a five-Echoplex onslaught.

We DID end up running a couple of subtle surround reverbs in the house system, so the audiophiles amongst you can heave a sigh of relief that, no, I didn’t go to a surround-sound performance space and just run a mono signal. What I DIDN’T do, though, was bring the KAOSS pad to the gig; even though I brought it with me to the East Coast, I chickened out at the last minute, feeling that I needed to spend more time in the woodshed with the thing before hauling it out at another gig.

It was great to see Monkey owner Dominic Frasca again; so much has happened with his own music over the last year, between his winning the Guitar Player magazine “Guitar Hero” competition, and seeing his album Deviations released on a large scale. (Apple’s web site has a good article covering Dominic’s recent spate of activity here.) It was also great to catch up with Elijah B. Torn, who was incredibly kind to show up early with his MIDI footpedal in tow, and program some buttons for me, as I’d been having some odd behavior with my own foot controller. Fortunately I made it through my set without experiencing any malfunctions, but I shudder to think what kind of shape I’d have been in if I had been wrestling with gremlins and Elijah hadn’t have brought a backup with him.

Overall the gig at The Monkey went very well. There were some pre-composed elements that weren’t as “together” as I might have liked, but the overall shape of the concert was one of the most unified and satisfying that I’ve had. Rhythmically, this was a strong show for me as well, and it was great to find some of the strangest-yet-sturdiest grooves I’ve come up with in a long while working their way into the set. I was particularly struck by the sound in The Monkey at this show; it truly is a boutique performance space, and Dominic has gone to serious lengths to make this room explicitly about the music. I don’t think I’ve ever had an experience of standing on stage and hearing my playing with the level of detail that I was hearing that night; it was almost like wearing headphones, except that the sound was coming from the five speakers arrayed around the space – quite an amazing thing. It’s definitely a completely different kind of feeling from playing in a regular kind of club or concert hall, and although the sheer nakedness of the sound can be a bit unnerving, it also allows for a level of dynamics and intimacy that’s extremely rare.

On the whole, I felt good about the show, and it was very well-recieved by the people I heard from afterwards. The Monkey’s a pretty small place – less than 25 feet square – so it’s not as if there’s a huge capacity for vast audiences, but it was still a good feeling to be able to pack the room on a Thursday night at $15 a ticket. It was a bit surreal to do a “regular” gig at The Monkey, and both Dominic and I were on the same page in terms of our reaction to it: definitely the right kind of show for this particular gig, but in the future we both want to explore more adventurous performance possibilities, to really take advantage of what The Monkey can offer. Hopefully I’ll be back on that side of the country before too long; I love New York, and was delighted to be able to head back there to do my thing.

It’s a funny thing – I’ve heard it said that big cities can be inhospitible places for musicians; regardless of a person’s musical predeliction, New York and LA have some daunting reputations for being jaded, challenging, inhospitible, you-name-it… but I’ve had some of my very best gigs and warmest receptions in these cities. I’d like to think a certain amount of that has to do with me getting at least part of my act together as a player, but I can’t ignore the crucial role of the people who have helped provide an outlet for me to do my thing. So, to Lisette Sutherland, Dominic Frasca, David Spelman, Elijah B. Torn, and all the rest: thank you so much for helping to get me in gear, and keeping me running.

You *so* deserve all the great things coming your way!

Looking forward to the next gig at Nova 🙂

im so envious of your musical career!

but banking has its moments. (ok no it doesnt)

: ) i cant wait to someday hear you play myself.

Never tried the AirFX myself – seems a bit too much of a “random sound-generating toy” for me, although if it’s good enough for Reeves Gabrels and Doug Wimbush then I’m probably talking crap…

New recordings… it looks very likely that my NYC gig from last month will be available as a free iTunes podcast in the very near future. I do have ideas for studio things I want to do, but knowing me it’s not realistic to think about that stuff being available in the forseeable future – my time lately is divided between my “day job” of teaching guitar, and dealing with “real life” stuff. Some day, though!