My guitar and Echoplex work appears on the scores to two different films opening this fall: 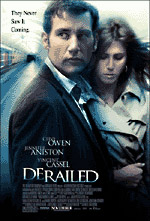 How unbelievably lucky am I to have these as my very first soundtrack gigs?

Many more details to come…

Can you also be heard on the movie’s official website?

And congratulations on Derailed. Last time we spoke, you didn’t mention it. Were you approached by the same composer?

Okay, duh. I now see that the composers were different. So how did the second gig come about?

I saw the trailer for Two For The Money a couple of weeks ago, and didn’t recognize any of the music on the trailer. It didn’t sound very much like Christophe Beck’s score at all, so my guess is that little, if any of it, actually appears in the film.

I didn’t get the call for Derailed until after I last saw you, so it wasn’t even on my radar until late summer. One of the engineers on Two For The Money also worked on Derailed, and brought me to Edward Shearmur’s attention. Yes, I won the lottery this year! (The trailer for Derailed doesn’t have any of my work, either, though I don’t know how much of it comes from Shearmur’s score.)

Don’t get discouraged yet. Trailers don’t often use music from the film they promote. You probably won’t know until you see the film itself.

Um… there never was any discouragement here – I’ve heard enough of each score, during the numerous sessions I did for each film, to already know that I’m well present and accounted for on the soundtracks.

But it’s very kind of you to fill me in on the details of the film music world! 🙂

I guess I misunderstood what you meant when you said “my guess is that little, if any of it, actually appears in the film.”

But I’m happy to make with the info. Let me know if you need any guitar tips.

Aha! The “little if any” bit referred to the music in the trailers – since trailers so often use music not from the film… just as you said. Ain’t the ‘net grand?!