Photos by Kana Miyamoto, painting by Pete Morris, cover art by Michael Candelori. Click on any image for a full-size version. 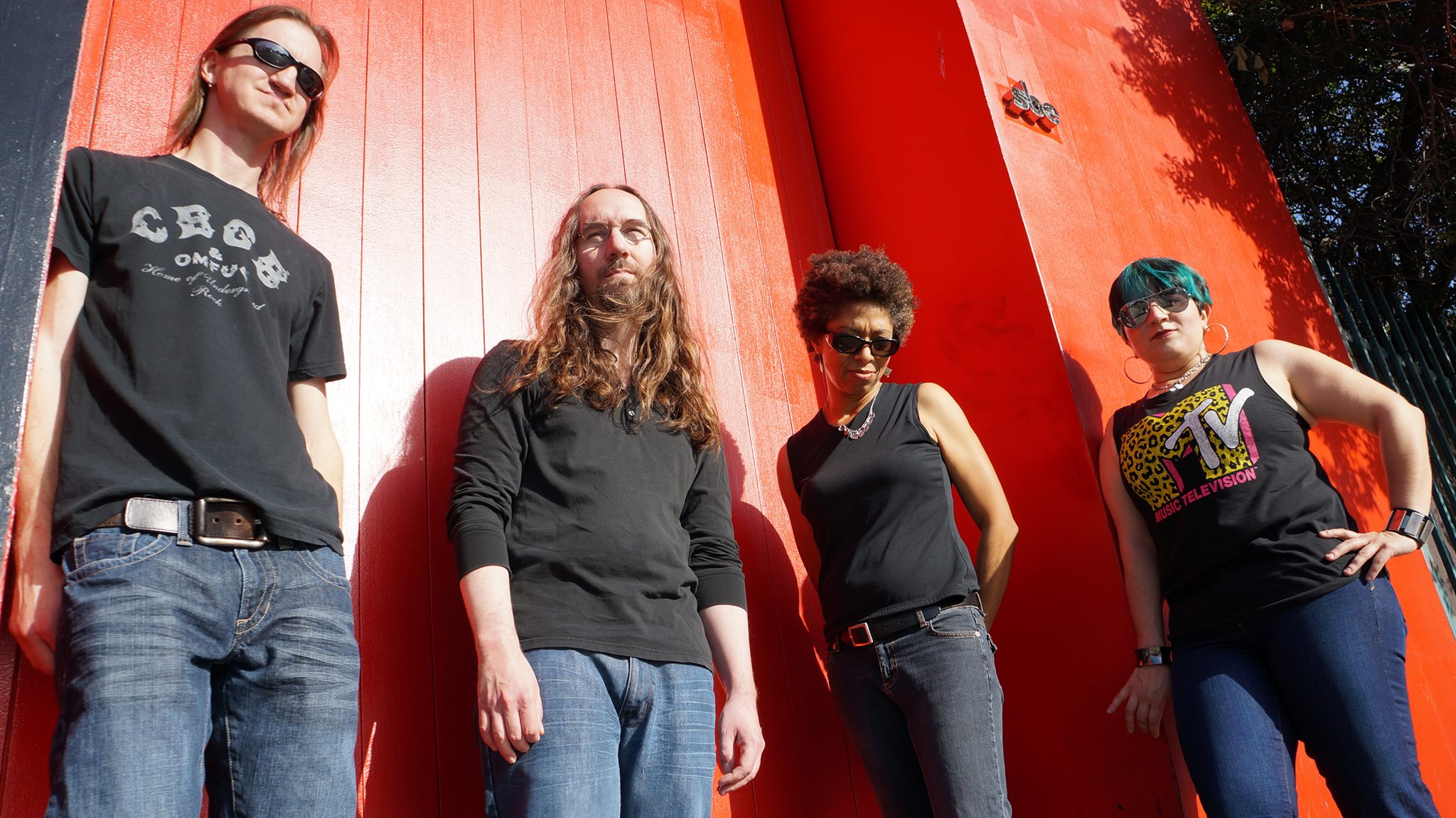 Epically Cracked is a jazz/funk/rock quartet I helped form in late 2013. (Our go-to tag line was “original, instrumental, experimental funk.”) We gigged around LA for a couple of years, and in July of 2015 we recorded our self-titled studio album.

Epically Cracked originally came together in late 2013 to perform the song “Boots” as part of Lisa Edelman’s set at the Brilliant Strings concert series. The quartet – Lisa on trumpet and electronics, bassist (and “Boots” composer) April Fletcher, drummer Chuck van Haecke, and myself – had never played together before, but when we had our first rehearsal, we were struck by how well we melded as a unit. Before we’d even performed “Boots” at Lisa’s set, we were talking about making the group an ongoing thing. 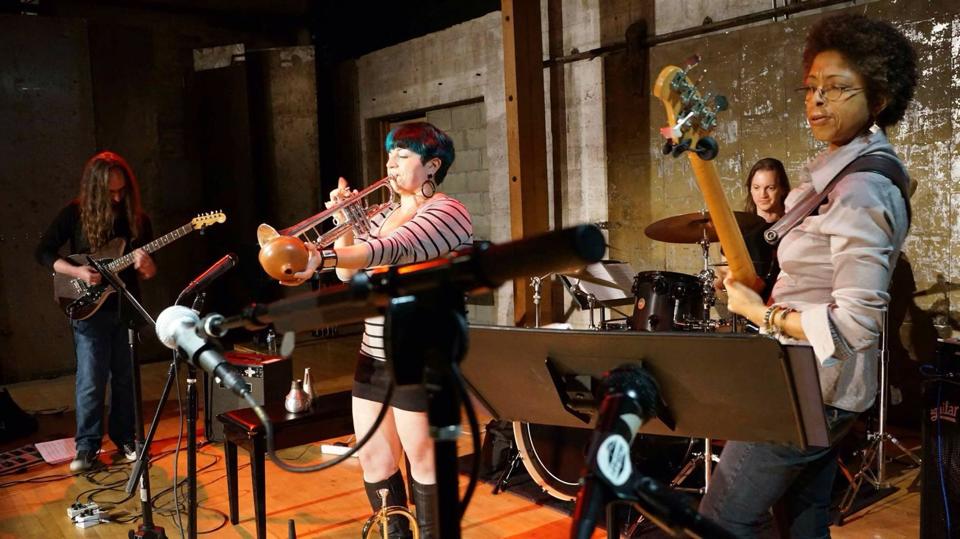 For me personally, being a founding member of a band was a pretty radical step. The last time I’d been “part of a band” had been in my college days in the mid-’90s. What made this truly uncharted territory for me, though, was the fact that Epically Cracked was a real democracy. Even the most open-minded groups tend to have a hierarchy, but for us it was truly an equal partnership. Individual composers were given final say on the arrangement and presentation of their own tunes, but overall decisions were always made through four-way discussion. 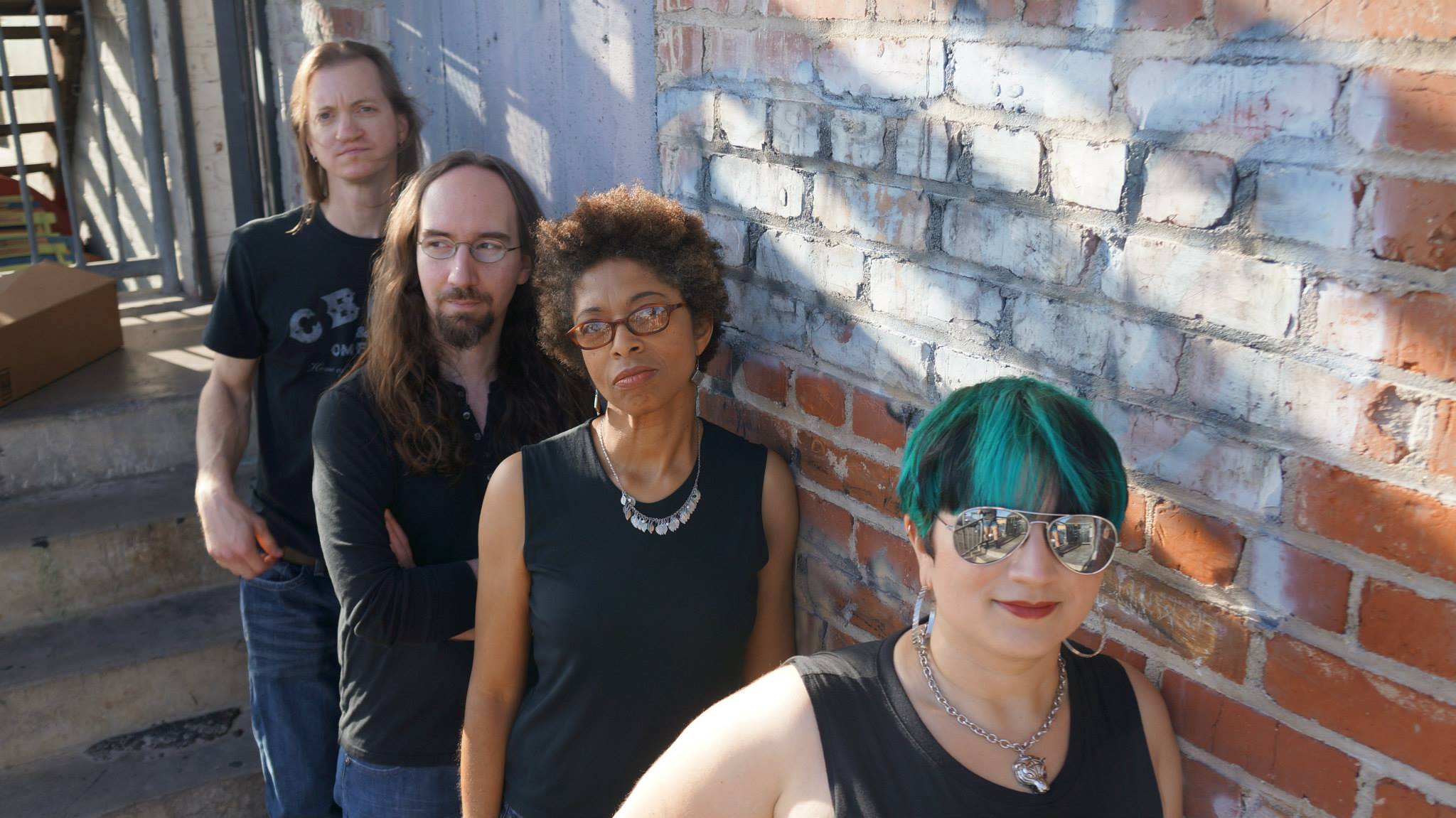 For me, Epically Cracked was largely about being able to look at what I do through other peoples’ perspectives. At the time, I was coming off of having dived back into the world of live looping with a string of solo performances in 2013 (also thanks, in no small part, to Brilliant Strings), and having put out two solo studio albums (Do The Math and The Hard Bargain) the previous year. I’ve always tended to alternate between periods of creative solitude and stretches of collaborating with other people, and playing in a band gave me a chance to think about making music in ways I hadn’t done in a very long time. We all shared musical pedigrees based in higher education (Lisa, April, and I are all CalArts alums, and Chuck is a Berklee grad), but we also came from a wide range of backgrounds and specializations. So there was a variety of perspectives informing the band’s work. 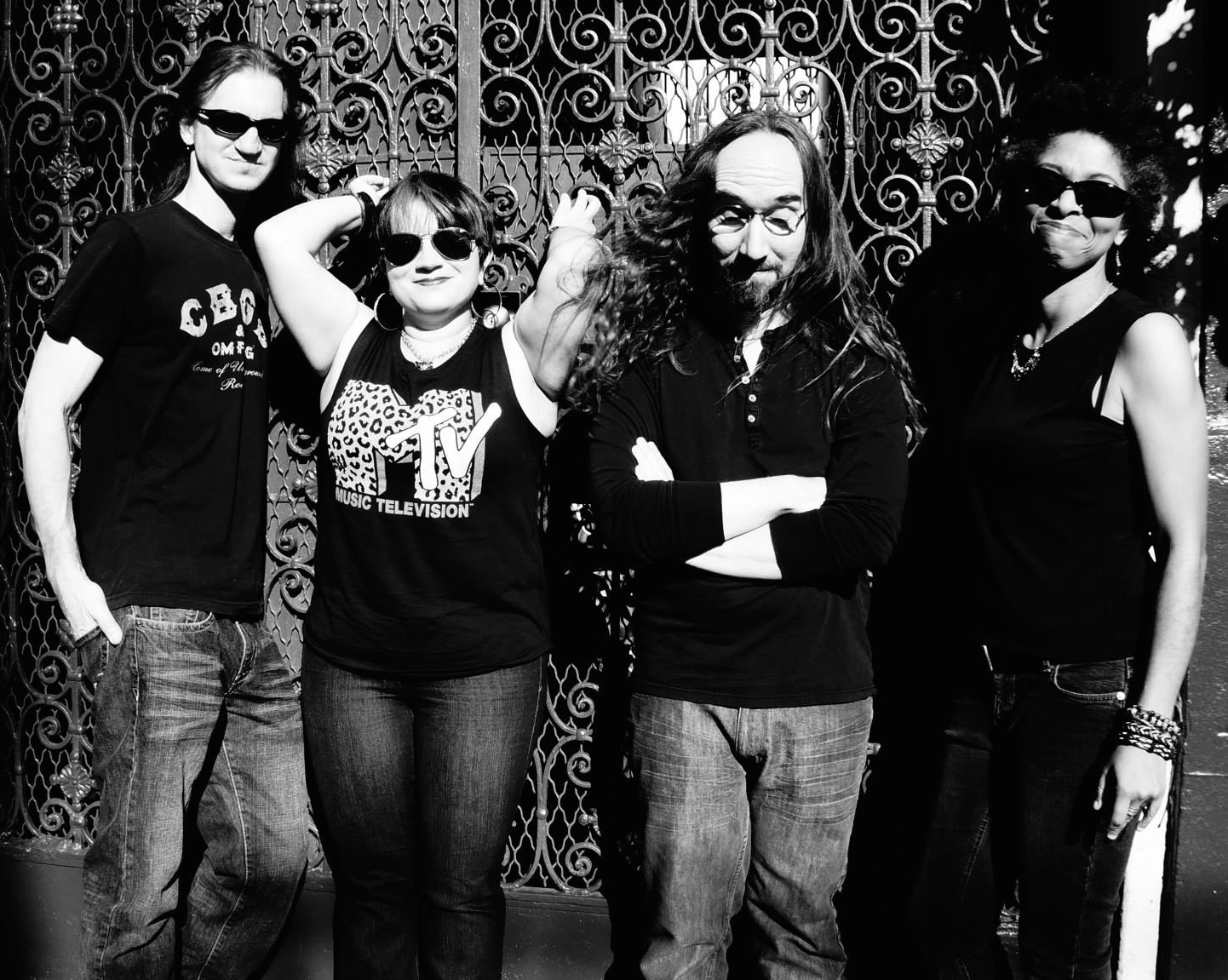 Everyone in the group was free to bring their own compositions to the table. For myself, I’ve always enjoyed being given someone else’s song and figuring out how to come up with a guitar part that serves the tune and the arrangement, and I was coming into the band after having spent the previous several years totally immersed in making my own music by myself. So I didn’t feel a strong drive to be writing for the group. With that said: as I was coming home from rehearsal one night, I started formulating an idea for a straightforward, easy-to-learn, uptempo tune based on some diminished-scale fragments. After a few hours of sketching ideas, I emailed the band a demo of “Haberdashery,” which became a regular part of the band’s set. 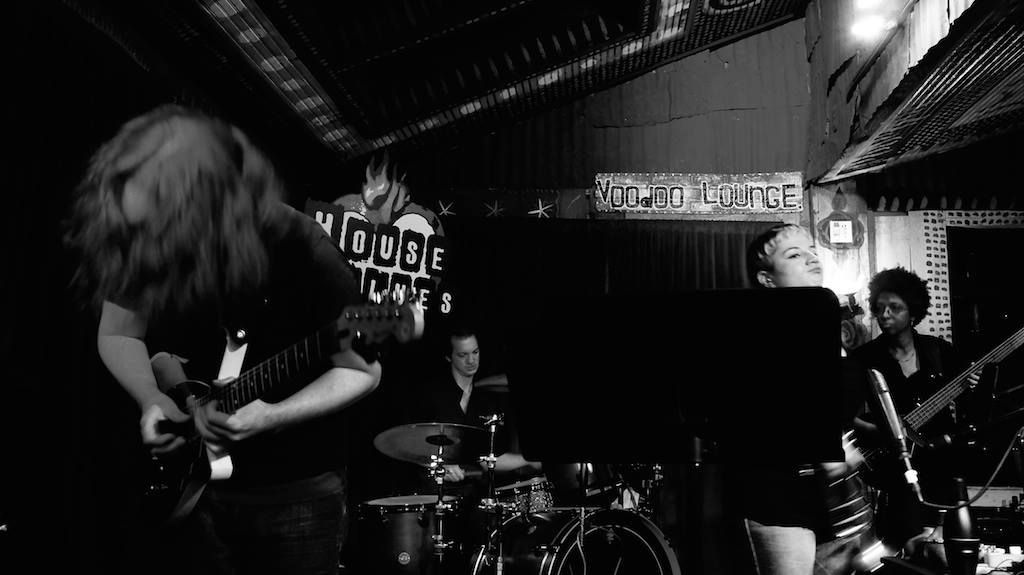 We gigged steadily for about a year and a half, at which point we started talking seriously about making an album. We ended up recording with engineer Scott Fraser at his gorgeous Architecture studio. We spent a day tracking the album, playing live together, just as we’d done for our entire existence. Indeed, one of the reasons we chose Architecture was because of the physical and visual layout of the studio, which allowed us to see one another and play live while still offering high-quality separation between the instruments. (The album’s only overdub is on “One Breath By One”: composer Chuck van Haecke wanted a “noise solo” from me to underpin the trumpet solo. After the band tracked the tune together, I overdubbed one pass of howling feedback and KAOSS pad textures. It’s intentionally mixed pretty subtly on the final album, so you “feel” it more than hear it as a separate part.)

The session was filmed, and footage was edited for each song on the album. See the whole thing here.

We edited and mixed the album on our own over the following several months. During tracking, there were two or three takes of each tune recorded, and during the mixing process we put together composite master versions, using the best takes of each section of a tune. Most of the time, this involved the entire band’s live performances being edited together at the same time. (For instance, the full band playing the verse in take one might be edited in front of the full band doing the chorus in take two, followed by the bridge from take one and the solo from take three). Occasionally, there would be some minor cutting and pasting to correct a wrong note or unsatisfactory bit. (For instance: I flubbed the chord on beat two of measure 130 of take two, so I grabbed another instance of that same chord from beat two of measure 134 and pasted it over the flubbed chord.) And in a handful of cases where the band decided it made the most effective musical statement, there was some “smoke and mirrors” editing done, where different individual performances from different takes were put together. (For instance: the first half of a guitar solo from the take two performance, and the second half from the take three guitar solo, which was placed on top of the band accompaniment performance from take one.) 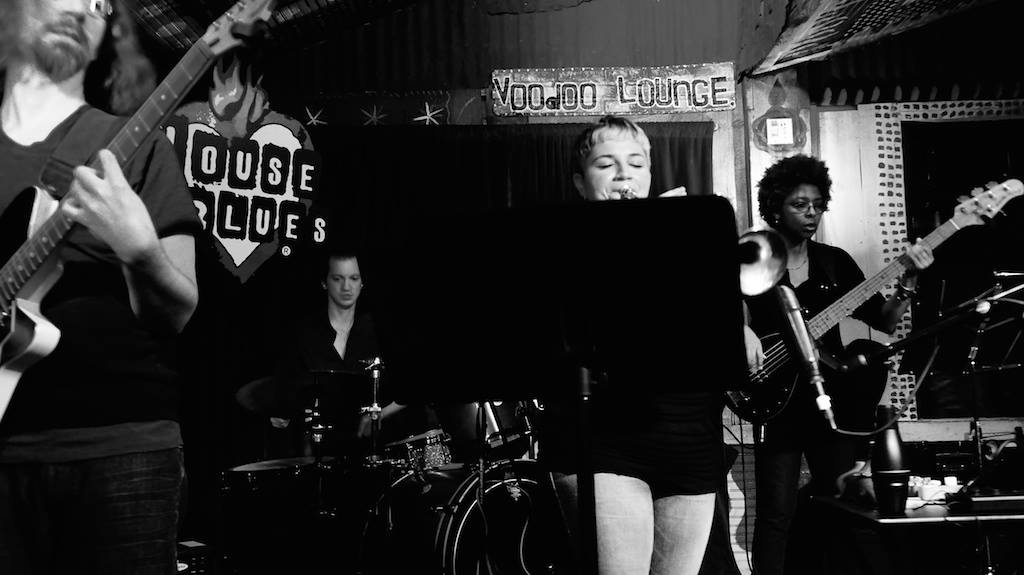 With a group like this, the perennial challenge of a studio album is striking a balance between the live energy that a gigging band creates, combined with the polish and detail that a studio production affords. For my money, we pulled it off; there’s enough production happening to enhance the arrangements and performances, and show the group in an optimal light, but it absolutely sounds like we did as a gigging outfit. (While I’m patting us on our collective back, I’ll also say that it’s pretty rare for an artist – much less a band – to produce their own album, let alone to do it successfully. I’m proud of the final product, not least of all for our having made it happen on our own.)

For the pure, unadulterated live Epically Cracked experience, here’s a full gig from the summer of 2014.

For most musicians, playing in a group with other people is simply how things are normally done; for me, that very aspect makes it possibly the single most atypical entry in my body of work. But beyond the novelty value, I’m delighted to have this album, and the band it documents, as a part of my creative history. As a player, writer, co-producer, and engineer, it gave me the chance to explore aspects of my work that I’d never documented before. And the band itself was among the most enjoyable collaborative experiences I’ve had – as a musician, and as a person. 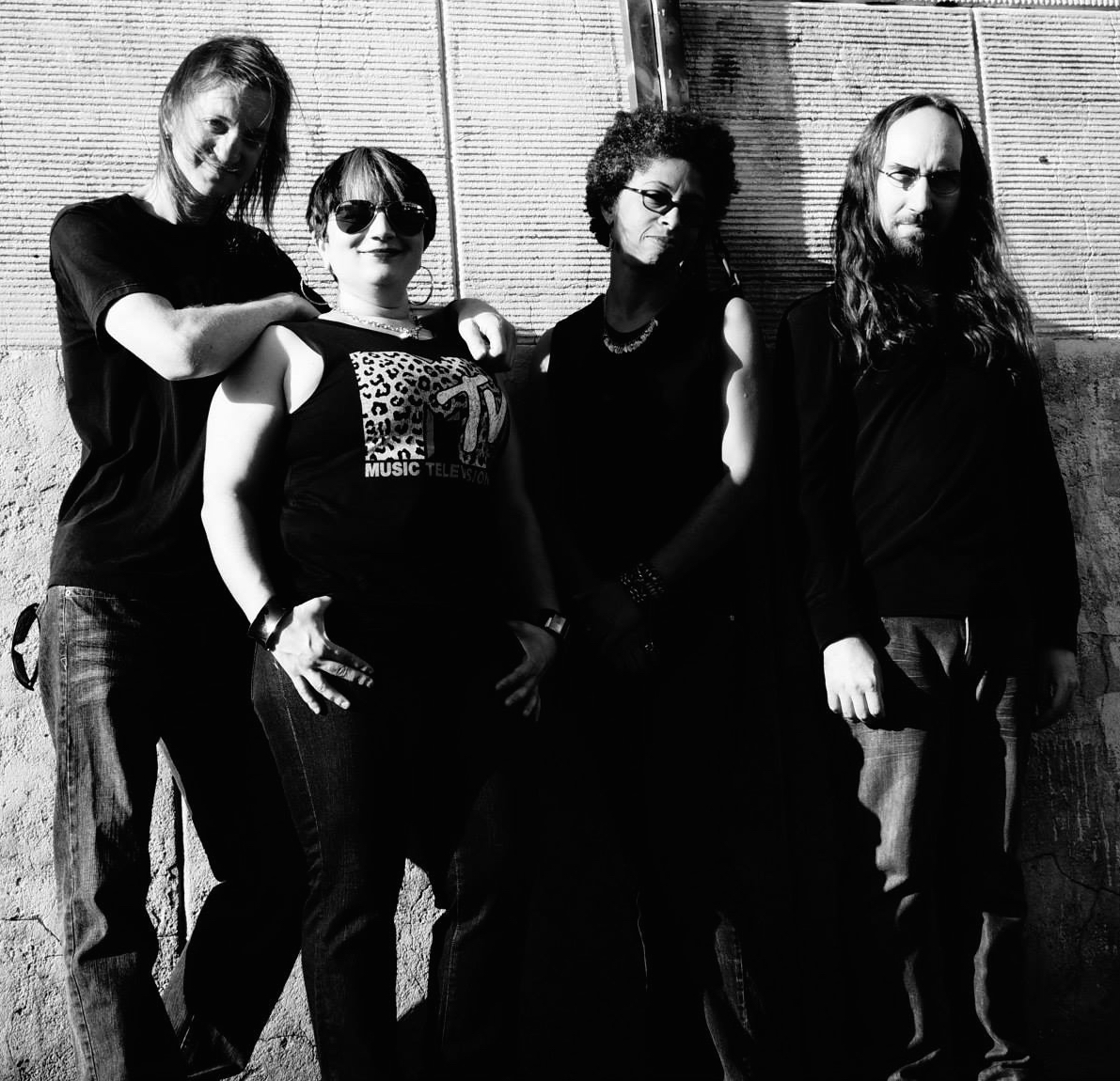 Gear geekery: the main guitar for the album was the chrome Reverend Slingshot. A tuxedo Reverend Rocco, strung with a heavier-gauge low E, was used on tunes where I tuned down the bottom string (“Haberdashery” went down to C#; “Da Daa” was dropped D.) A Reverend Kingsnake was the sole amp used, mostly set to the “UK” mode, though the “US” mode got engaged for tunes with a generally cleaner, brighter tone. Pedals included a Fulltone OCD (the “base overdrive” tone throughout the album, used in particular on “Boots,” “One Breath By One,” and “Pieces Lost”), a Source Audio Multiwave Distortion (the solo on “Boots”), a Fuzzhugger Algal Bloom (the solo on “Hopscotch”), and a Lovepedal Eternity E6 (a higher-gain variant on the standard Eternity design; it’s on the solo on “Da Daa,” and the rhythm tone on the “Haberdashery” bridge). I ran a Korg KAOSS Pad II in the effects loop of the Kingsnake; it can be heard most clearly on “Pieces Lost.” The Echoplex Digital Pro was used for the drone on “Da Daa.” 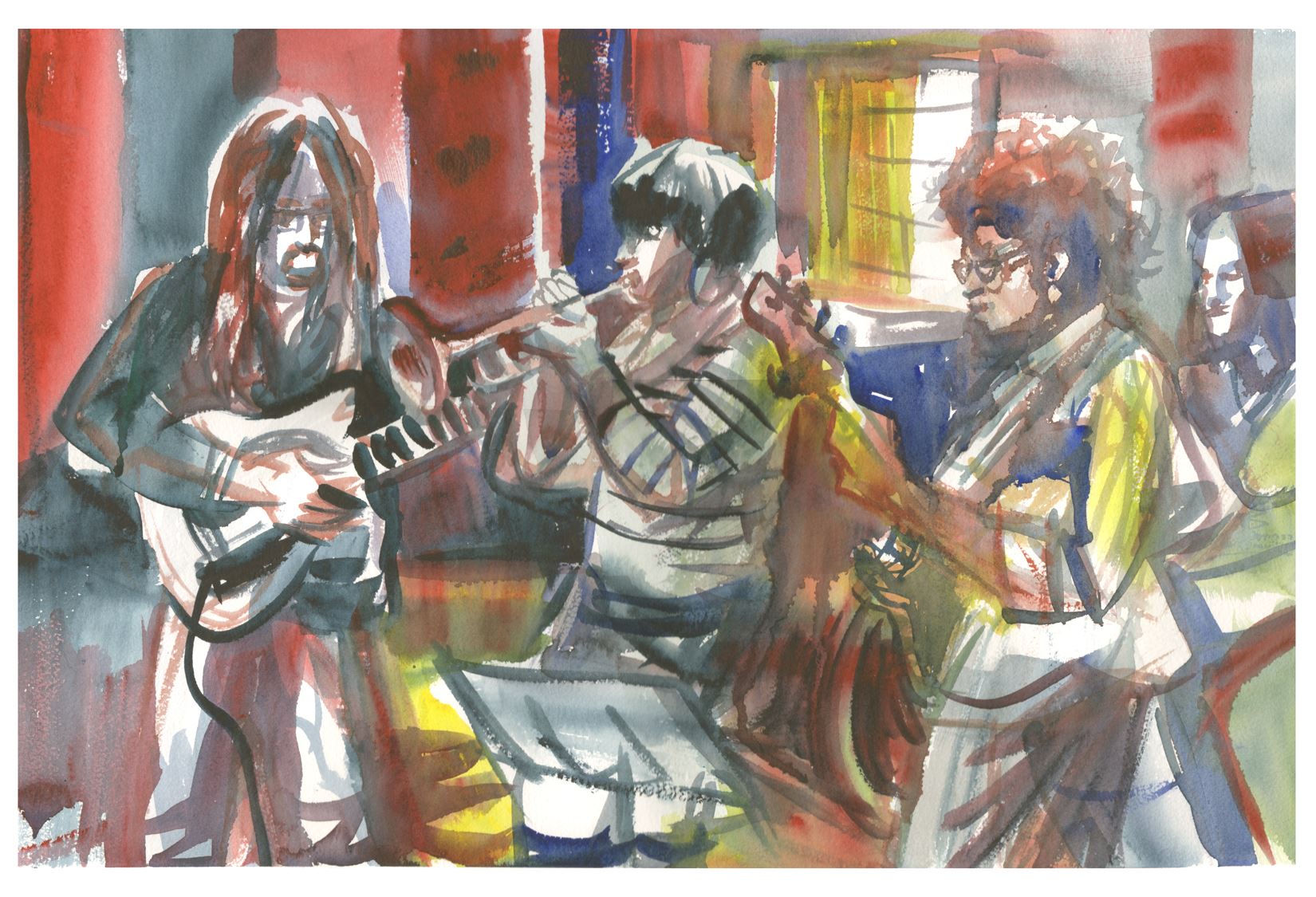