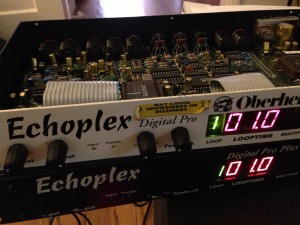 Welcome to the Echoplex Analysis Pages Version 3.0 – remastered and revised in December 2015.

The Echoplex Digital Pro (or “EDP”) has occupied a unique place in the looping world since its introduction in the early 1990s. It contains functions and possibilities for looping as a dynamic and evolving craft that were utterly groundbreaking for its time. It’s a testament to its forward-thinking design that some two decades after its release, people are still coming to terms with the possibilities it pioneered.

But a large part of what makes the EDP so special is its very deep, unique architecture, which often seems strange, intimidating, or overly complex to newcomers. So these pages are meant to de-mystify the Echoplex, offer some possibilities for how to deal with it as a dynamic performance tool, and demonstrate some of what makes the EDP so special. I also hope that people who are new to the concept of real-time looping can get a better understanding of how this craft is approached, and discover some of the many ways it can be used in various musical situations.

This is a document of my own personal evolution as an EDP player, which means that a lot of this music is extremely ideosyncratic. By no means do I intend these pages to cover every possible technical or stylistic realm that can be explored with the EDP, or with looping in general. Rather, this is my attempt to analyze and explain some specific possibilities that the Echoplex offers, using my own music as examples of how some of those possibilities can be employed. But that doesn’t mean you have to play any of the musical styles I’ve covered here in order to use the Echoplex for your own music.

Regardless of whether you’re an Echoplex novice or an experienced looper, you may want to refer to the Echoplex manual for a more detailed listing of specific terms, functions, and parameter settings.

There are several different sections to these pages, covering a variety of Echoplex angles:

Ambient Guitar (1997)
Abstract, highly processed, textural electronic music. A good introduction to some basic concepts of looping in general, and the Echoplex in particular.

Studio Looping (1998-99)
A detailed account of different ways the Echoplex was used in a studio-based environment, for the making of the album Disruption Theory.

Normalized (2002-2003)
Glitch-core grows up: a track-by-track description of my second CD, which plunges the electric guitar headfirst into the realms of hip-hop, funk, and IDM.